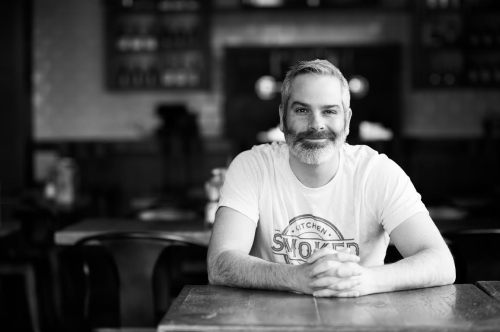 Today’s Five Finds on Friday come from Rowe Webster, Partner and General Manager of Smoked Kitchen and Tap, the new brick-and-mortar home to the food of the popular truck Smoked BBQ Co. Webster:

Ever since Smoked Kitchen and Tap has been in the works I’ve been lucky enough to be a part of menu tastings. This insanely difficult job consists of me tasting the amazing brisket, pork, ribs and everything else that these guys smoke day in and day out. Aside from gaining weight, I gained perspective on all of the intricacies that are involved in every component of every dish. No entree is less important than the sides that come with it, no starter is less important than an entree. I have admired the hard work that these guys put in, from Justin and Kent firing up the smokers at 2 am to Kelley yelling in my face at 9 pm. It’s a nonstop project and clearly a labor of love. We all know that Charlottesville has some amazing restaurants and these are my favorite dishes from the guys behind the scenes that are doing the thankless work day in and day out.

1) Pork Tacos at C&O. “I’ll begin where I often end my nights: the late night menu at C&O, most notably the pork tacos. We all know that C&O is a Charlottesville mainstay and for great reason. None is more apparent than the menu they are able to maintain after serving a busy dinner crowd. It’s always a pleasure to walk in there and have the New York Times crossword waiting by the fish tank and know that food is not only available but reliably delicious. The work that Anthony, Amanda, Jenn and Dustin put into making amazing Manhattans is always appreciated and quite welcome after a long night. Abe’s Bud and Beam combos are not to be passed over either, especially if you can play dice.”

2) Roast Pork with Fennel Sandwich at Greenwood Gourmet. “After one of those late night meals, nothing pieces me back together quite like a sandwich at Greenwood Gourmet. If you can manage not to buy the first thing you see in the deli case, glance up to the specials board. The roast pork with fennel has been a go-to of mine for as long as they have had it there. David, Nina and Rufus have obviously put as much time and thought in the menu as they have with every other aspect of this store. It really is a pleasure of mine to interact with them as often as I’m able. Put that up with popups from Potter’s Craft Cider, Michael Lewis, and Polina Chesnakova and you have gold on the footsteps of the Blue Ridge.”

3) Hangar Steak and Shaved Salad at Oakhart Social. “In the rare occurrence that I have a weekend night on my hands, my girlfriend and I head straight to the bar at Oakhart Social and order the shaved salad with the Hangar Steak. Tristan has the kitchen dialed in to a tee. Salads have been tough to win my heart but this one has it. Pair that with Albee and Brendan behind the bar and it’s a winning combination every time. From a bartender’s point of view, Albee is the best in the business. His drink menu and knowledge are unparalleled and all served with a little salt. Albee rarely puts the buggy before the horse. Toss in a few Cub hats in the kitchen and I’m always happy.”

4) Banh Mi at Lampo. “Before beginning this journey I had the pleasure of working with some great friends of mine at Lampo pizza. The fact that almost every single Five Finds on Friday list, not to mention dish of the year, features these guys is a testament to the time that they put in on a daily basis. With so many dishes to choose from at a Neapolitan pizzeria, I’ll go with what everyone expects to see on the menu; the banh mi. It was a special that the boys ran a year ago and it quickly became one of my favorite things. From watching Loren bake French bread from scratch to watching the guys toss out one iteration after another until they perfected, it really shows their combined passion and dedication to what they do. Throw a Shelvis on the floor and the most knowledgeable sommelier behind the bar and it’s no wonder they have garnered the attention and success that they have.”

5) Oysters Rockefeller at The Fitzroy. “From day one, Kelley Tripp has been the guy that I have learned from and the guy that continues to surprise me on a daily basis. It’s no wonder that when he teamed up with Rich, Kevin and Rooney to open a space downtown that my last dish comes from them. I truly believe that the oysters Rockefeller from the Fitzroy on the downtown mall is my favorite bite in Charlottesville. Pair it with the pork chop and a cocktail from Sommertine Cline and you have a true classic. The atmosphere that Jeannette Andamasaris designed and Hector Zamora built really made me feel at home, which is something that I feel as a person in the service industry we all strive for.”