Bidding for a Job: How a Charlottesville 29 Restaurant Auction Win Turned Into Employment

During last year’s The Charlottesville 29 Restaurant Auctions, where Charlottesville restaurants created once-in-a-lifetime experiences for whoever pledged the largest donation to the food bank, a common theme emerged: kindness is contagious. Time and again during the auctions, one act of kindness would lead to another. And another. Even now that bidding has ended, the theme has continued as auction winners enjoy their prizes. In fact, one pair of winners wound up with not just a spectacular experience, but a job.

Throughout the auctions, Jessica Fake was one of their biggest supporters. “When my fiancée Camie Mess and I learned about the auctions,” said Fake, “we immediately fell in love with the idea of supporting local restaurants while supporting the Blue Ridge Area Food Bank.” Fake bid on several items along the way, but it was not until an unexpected late addition that her enthusiasm peaked.

The award-winning Sussex Farm operates a food stand at area farmers’ markets, serving kimchi and other Korean cuisine prepared by Korea native Jen Naylor, aka Mama Bird. Among the stand’s loyal following is Fake, who is half-Korean. “Camie and I looked forward each week to saying the very few Korean words I know, such as 안녕하세요 (hello), 감사합니다 (thank you) and the most appropriate for the situation 맛있어요 (delicious) — to express our gratitude for Jen and her food.”

And so, when Fake learned that Sussex Farm would be offering an auction experience, she swooned. Fake placed a bid right away, and with it, wrote: “Just when my fiancée thought I’d stop being obsessed with these auctions, and having been knocked out of the ones where we thought we had a shot, and bidding away money that we should be saving, you come in with this awesome item. Well done.”

The item? “Kimchi Forever!“: free kimchi for a year, a hands-on kimchi lesson at Sussex Farm, and a multi-course Korean feast served outdoors beside the farm’s bonfire.

Fake’s only concern was that the Sussex Farm auction was set to end with live bidding at Prime 109’s celebration of the auctions, which Fake could not attend due to a conflict. And so, Fake instead bid by proxy, submitting a maximum bid, and hoping for the best.

Unfortunately, Fake’s bid fell just short. But when Naylor learned that the runner-up had come so close to winning, she offered to double up: create the same auction experience for the runner-up – another year of kimchi, another kimchi lesson, another Korean feast. Combined, the donations from the two winners were enough to create more than 8,000 meals for the area’s hungry.

Fake could hardly believe it. “The generosity of Jen in doubling her offering blew us away,” said Fake. “She’s a tiny local business that just operates at the farmers market, so to give away so much means that her heart is larger than life, and her own wallet.”

And so, this past fall, Fake, Mess, and some friends drove out to Naylor’s farm in Esmont to learn to make kimchi. 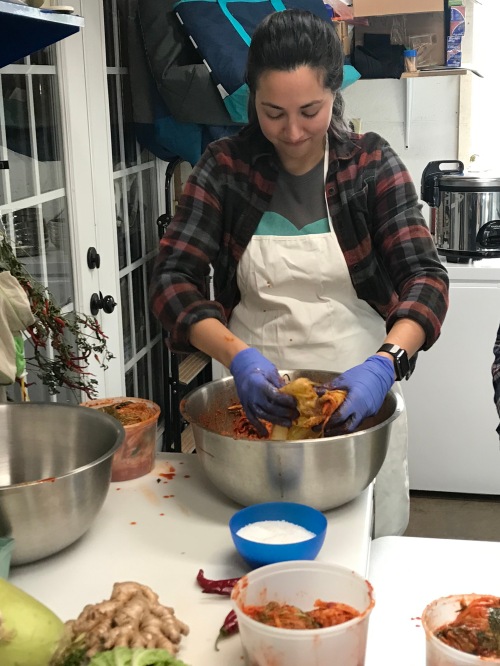 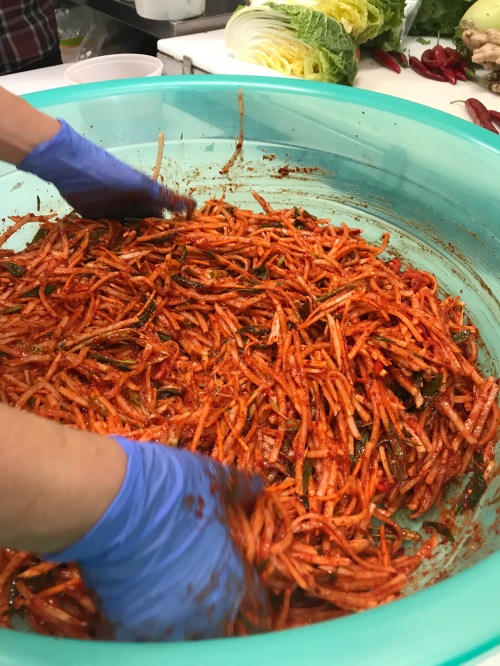 When it came time for their Korean feast, Fake’s group pulled up a second table so that Naylor and her family could join. Over dinner, as Naylor described her love of farming, cooking, and sharing food with others, she mentioned her plans to prepare 600 pounds of Winter Pogi Napa Kimchi. “Wow, that’s a lot,” said Fake. “Do you need help?”

A few weeks later, Fake and Mess found themselves taking a day off from their real jobs to help make 600 pounds of kimchi at the farm. There, they learned of Naylor’s expansion plans, and more work to be done at the farm, which Fake and Mess returned to help with over the course of several weekends: painting, shelving, moving supplies and more. Before they knew it, they were even spending the holidays with the Naylors at the farm.

Now, Fake and Mess still work for Sussex Farm, helping with the food stand each week. Mess, who has long had a love of cooking, works side-by-side with Naylor, learning and preparing the food, while Fake helps with the front of the house, taking orders and hawking kimchi. “Somehow,” Fake said, “through the magic of kimchi, we found ourselves included in the circle of Mama Bird’s love.”

Kindness is contagious, no? 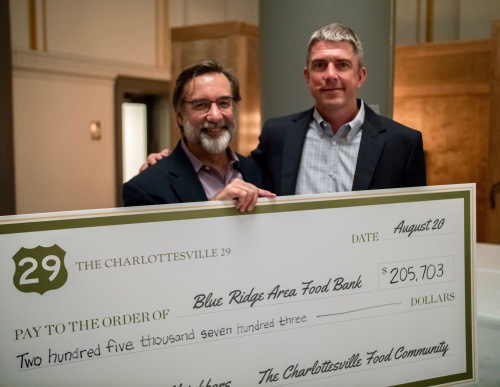 See that check?  It’s not accurate.

Kindness is contagious, you see. In The 2019 Charlottesville 29 Restaurant Auctions, our area’s top restaurants and artisans offered once-in-a-lifetime experiences for whoever pledged the largest donation to the Blue Ridge Area Food Bank. Though the auctions came to an end last night at Prime 109, our community’s generosity did not. The symbolic check represents the auction’s total benefit to the food bank at end of last night’s bidding. But, even after it was written, that benefit keeps growing.

First, Sussex Farm offered to duplicate its offering for the runner-up in the auction for its Kimchi Forever experience, yielding an additional $1,100 for the Blue Ridge Area Food Bank.

Then, UVa Men’s Basketball Coach Tony Bennett doubled up, too. Bennett was the feature in Bodo’s Bagels’ Lunch of Champions auction experience, a lunch in the office of the coach of the 2019 NCAA Men’s Basketball National Champions. This was the final item in last night’s live auction at Prime 109, and, in a thrilling finale, bidders drove the bid all the way above $50,000. This morning, Bennett was so moved to learn of bidders’ generosity that he offered a second experience — one for each of the two leading bidders. In turn, the two bidders will each make a $54,000 donation directly to the food bank.

With these additions, the total benefit to the food bank from The 2019 Charlottesville 29 Restaurant Auctions now exceeds $250,000. Thanks to the efficiency of the food bank, each dollar can create four meals, meaning that, through the auctions, our food community will have provided more than one million meals to our area’s hungry.

Stay tuned for a full report on the amazing effort over the last two months. 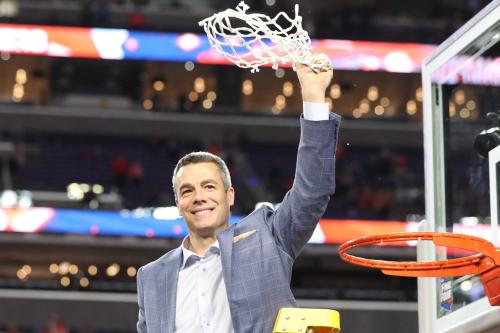 Here is your chance to experience JM Stock Provisions like you never have before, while helping to feed the area’s hungry: The Charlottesville 29 Artisan Auctions. As one of the artisans of Prime 109’s August 20 Celebration of Charlottesville Restaurants, JM Stock has created a once-in-a-lifetime experience for whoever pledges the highest donation to The Blue Ridge Area Food Bank. Thanks to the generosity of JM Stock, the entire winning bid goes directly to the food bank. And, thanks to the efficiency of the food bank, each dollar donated creates four meals for the area’s hungry.

The JM Stock signature experience for The Charlottesville 29 Artisan Auctions:

JM Stock may be best known for two things: biscuits and butchers, and the auction winner will receive both.

Many consider JM Stock’s ham biscuits the best ever version of Charlottesville’s signature Cville Ham Biscuits. The auction winner will enjoy an entire year of JM Stock’s ham biscuits anytime they want, up to twelve per month. Just walk into JM Stock twelve times each month, and pick up the ham biscuit of your dreams. Or, pick up your month’s dozen all at once, whichever you prefer.

Plus, the winner and nine friends will receive a private modern butchery class from JM Stock’s expert artisan butchers on the craft of sustainable pork production. Many of us never stop to think about how pork products wind up as neatly packaged cuts in market displays. Where do they come from? In a hands-on class about the basics of pig butchery, the auction winner’s group will learn about the various cuts and preparations, as well as what it takes to produce JM Stock’s Autumn Olive Farms pork from start to finish. Throughout the evening, the group will also enjoy plenty of adult beverages and snacks, including JM Stock’s award-winning charcuterie, sausage, and some of the butcher’s favorite specialty cuts.

Note: Biscuits are not transferable. The auction winner must pick up the biscuits in person. For the class, the auction winner will schedule the experience on a mutually convenient evening with JM Stock, from 7:30 – 9:30 pm.

Place your bids now by email at charlottesville29@gmail.com. Bidding ends August 20 at Prime 109’s Celebration of Charlottesville Restaurants. Regular updates of the leading bid will be posted below.