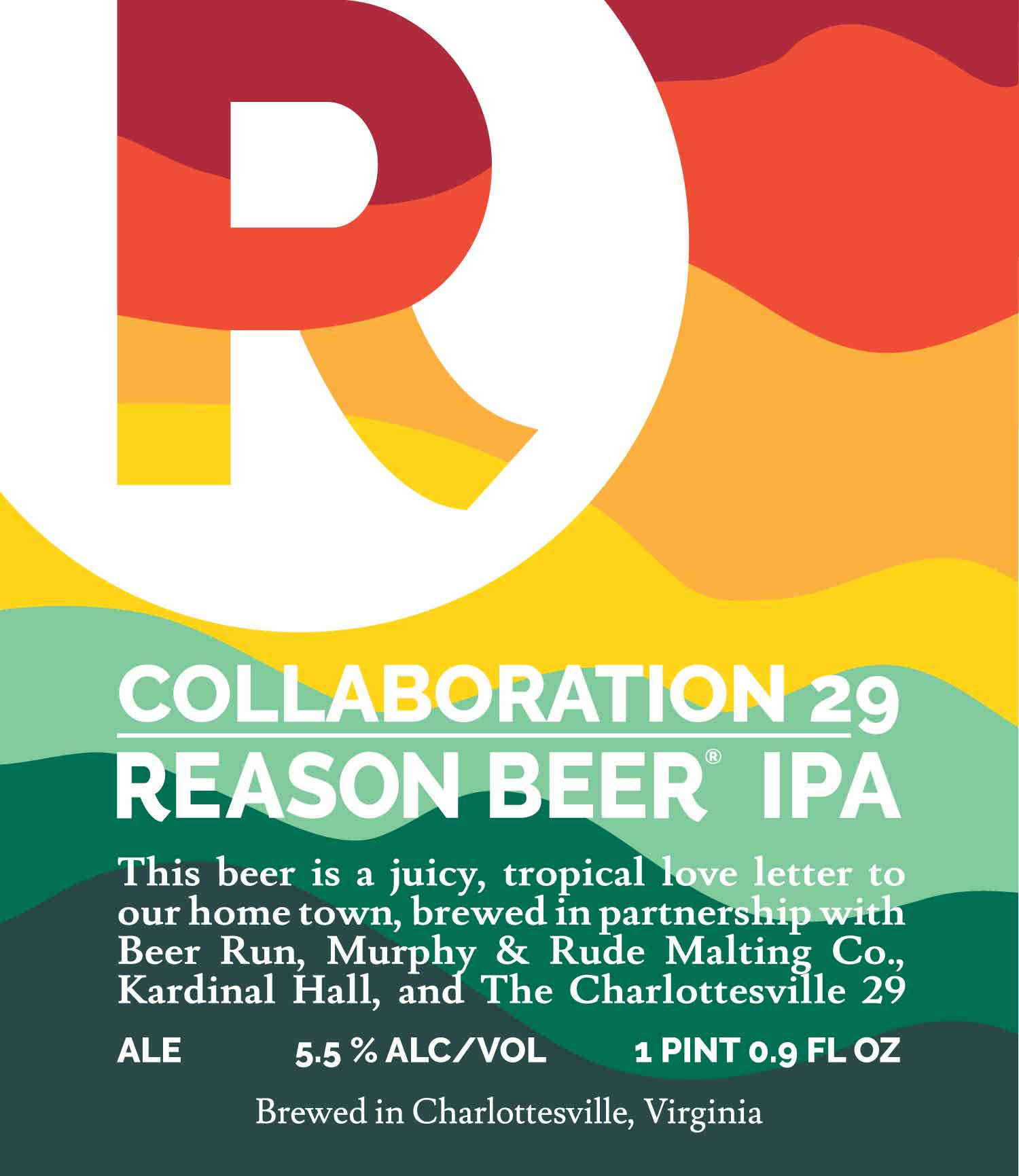 Though rarely made explicit, an underlying theme of this site’s content is community collaboration. The Charlottesville 29 exists, after all, to celebrate the Charlottesville food community. And, perhaps the defining characteristic of our food community is that it is in fact a community. While cutthroat competition can plague food cultures of other cities, Charlottesville, warts and all, is different. “The community really does function in an interconnected way,” Splendora’s PK Ross once explained. “And that has so much to do with the love that everyone has for what they are doing.”

And so, yes, when Reason Beer invited me to collaborate on a beer, much of my excitement stemmed from my fondness of beer and Reason. When I started this little website six years ago, I never imagined it might one day lead to making a beer with the former head brewer of Maine Beer Company, one of the country’s most acclaimed breweries. Just a year old, Reason has already earned its own national praise.

But, what made the invitation so special is the beer’s stated aim. The purpose, Reason said, would be to celebrate Charlottesville’s food and drink community — the very thing this site has done since its founding.

Later this month, Reason will release Collaboration 29 – “a juicy, tropical love letter to our home town, brewed in partnership with Beer Run, Murphy & Rude, Kardinal Hall and The Charlottesville 29.” At 5.5% ABV, Reason brewer Fulton describes Collaboration 29 as a “very sessionable IPA featuring a delicate blend of tropical, citrus, and pine notes.” Having sampled a test batch, I would describe it as delicious. Fulton says that he strives towards perfection, knowing he can never reach it, but hoping to get closer each time. Wow, this one may be as close as it gets.

What may sound like an odd group of collaborators, to Fulton made perfect sense. Fulton chose The Charlottesville 29, Beer Run, and Kardinal Hall because he wanted “to work collaboratively with some of our earliest supporters in Charlottesville.” Their support, he says, “has been incredibly helpful in establishing Reason Beer in the local beer scene.” Meanwhile, in true community spirit, the inclusion of new local malting company Murphy & Rude was to pay it forward. “We thought it would be a great opportunity to share the spotlight with another fantastic Charlottesville startup who also helps put our region on the craft beer map,” Fulton says.

Release events are planned later this month at Kardinal Hall (June 28), Beer Run (June 29), and Reason (June 30). Check back for details. Meanwhile, read on to learn how we made Collaboration 29. Thank you, Tm McGovern, for capturing the images.

If you are not familiar with how beer collaborations work, they can run the gamut. In some cases, they are true collaborations, with brewers sharing and tweaking ideas, crafting a product together. In other cases, one brewer runs the the show, and they are little more than an excuse for folks to get together and talk about (and drink) beer. Ours was closer to the latter.

Yes, we all provided input. But, Fulton drove the process. This made sense. Fulton, after all, has brewed legendary brews like Mo, Lunch, and Dinner. I brew . . . coffee?

Still, Fulton did include us. The group’s initial idea, Fulton says, was “to create a drinkable summer IPA that will satisfy hop heads while not alienating the hop-adverse.” Next, Fulton asked me about my favorite hop varietals. I told him I am not sure I have a single favorite — I like so many — but I did name a few that appear in many of my favorite beers. The final hop profile includes Mosaic, Amarillo, and Simcoe.

To begin making Collaboration 29, we ran Murphy & Rude malt through a mill. Murphy & Rude is the area’s first malting company, creating malt from local grains. We used their Crystal 40, made of violetta barley from Brann & King Farms, and Wheat, made of soft red winter wheat from Bay’s Best farm.

The milled malt was then transferred to a vessel called a “mash tun” where hot water was added, creating mash, something many brewers say is one of their favorite smells. I can see why. The heady aroma took me back to childhood memories of my father making warm malted milk from Horlicks.

The milled malt sits in the hot water and creates wort. To the wort, we added salts and minerals to enhance sugar conversion and also aid the finished product by creating a more rounded mouthfeel and flavor profile, as well as better head construction and glass lacing.

Next, we removed a wort sample to test that the pH was the magic number we were looking for.

Meanwhile, a process called vorlauf circulated the liquid in the mash tun, running it off the bottom through pipes and circulating it back to the top, which helped to clarify the wort, removing malt sediment. A window in the piping allowed for monitoring the improving clarity.

After the wort was sufficiently clear came runoff, diverting the wort from the mash tun to the kettle, where more hot water was added. This required turning on the heat in the kettle. It was a great thing I was there for this vital step. Here I am turning the switch from the “Off” position to the “On” position. 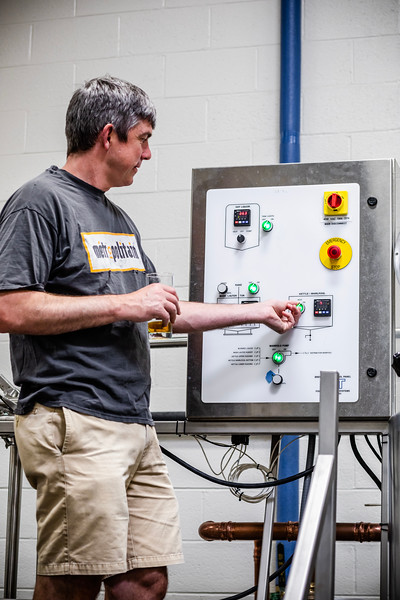 Meanwhile, Fulton removed the leftover malt (“spent grain”) from the mash tun, which local farmers use as feed. 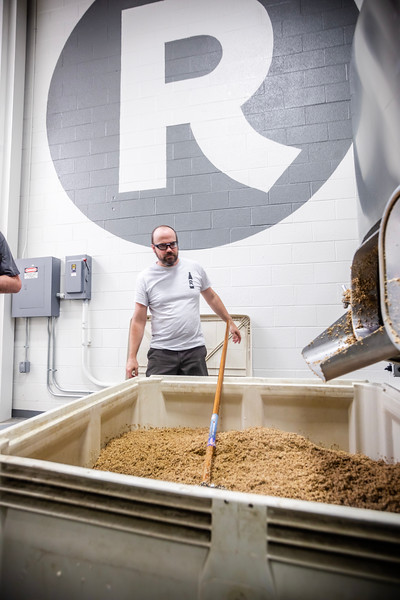 In the kettle, the wort boiled for a hour.

There’s lots of down time during brewing. Fortunately, Devon kept our glasses full. 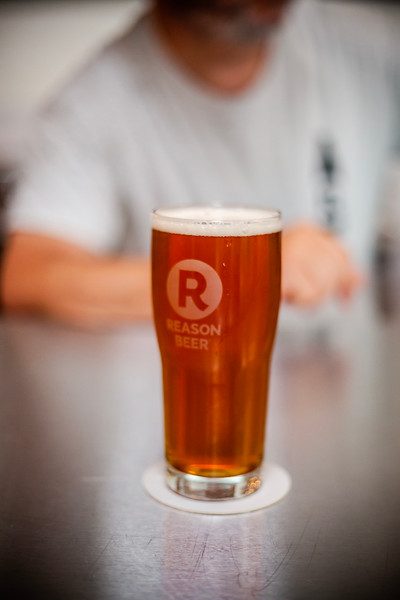 And, there was plenty of time to talk over beer. 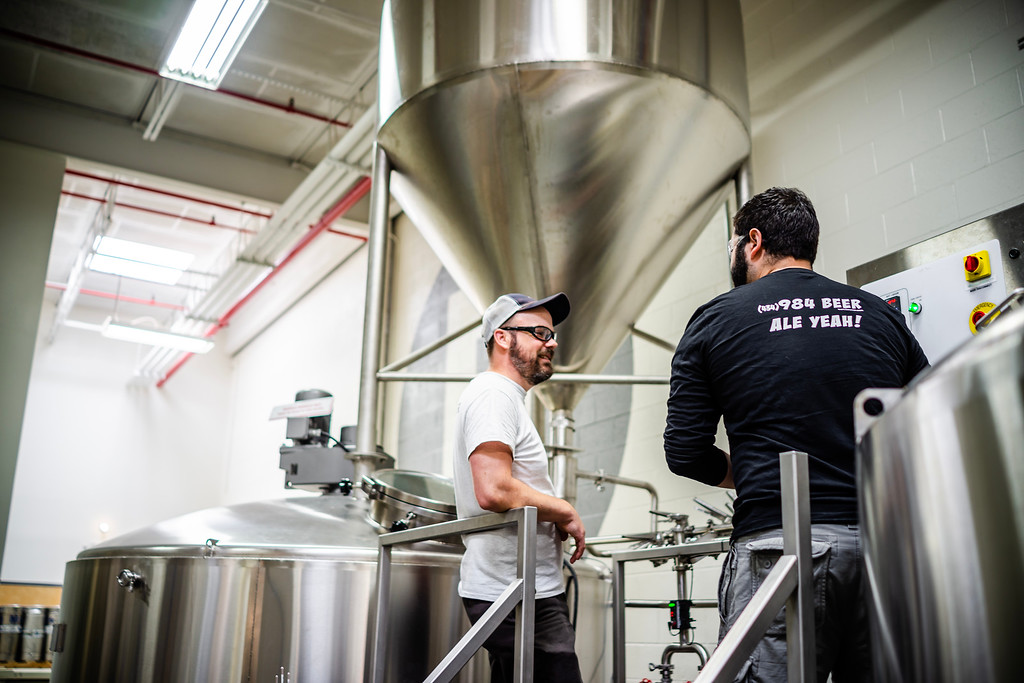 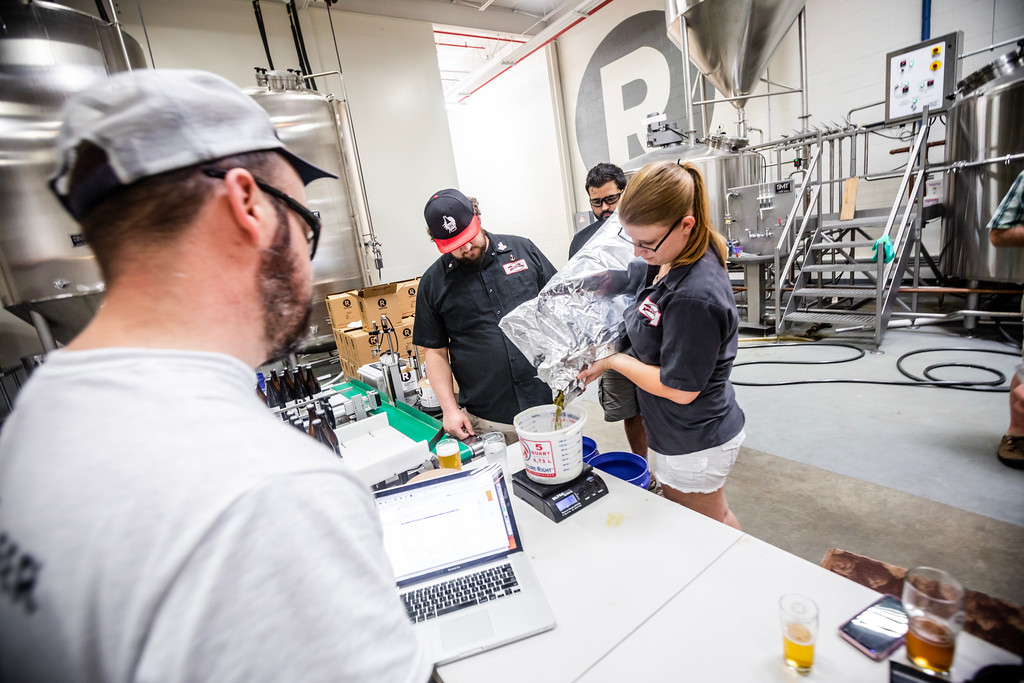 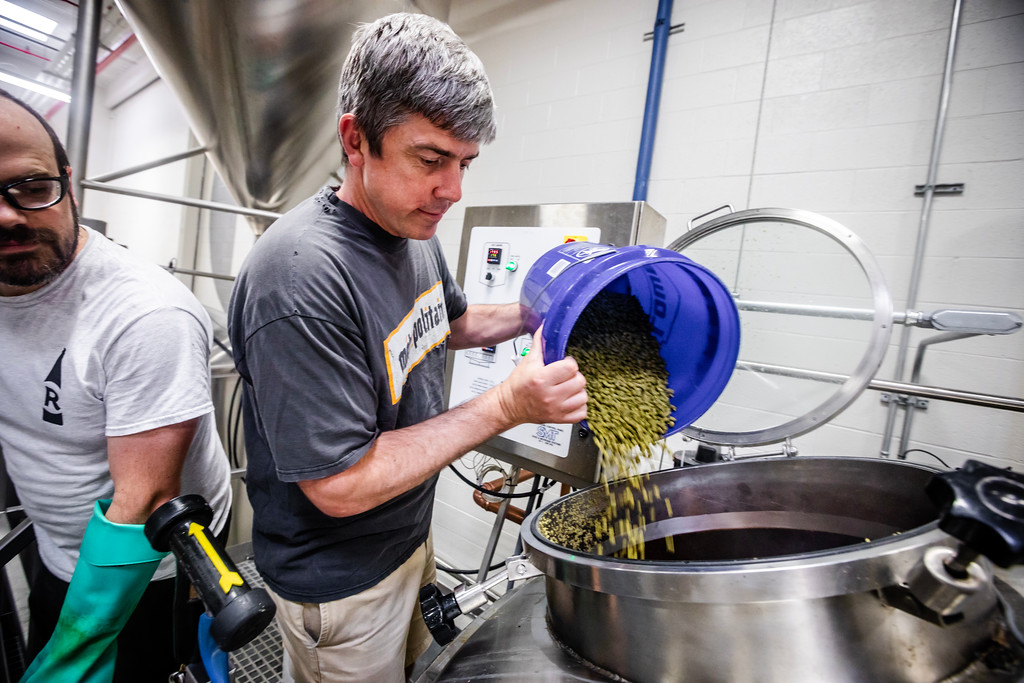 Finally, the wort was pumped from the kettle to a vessel called a fermenter. There, Fulton climbed high and added yeast to begin fermentation, transforming wort to beer. 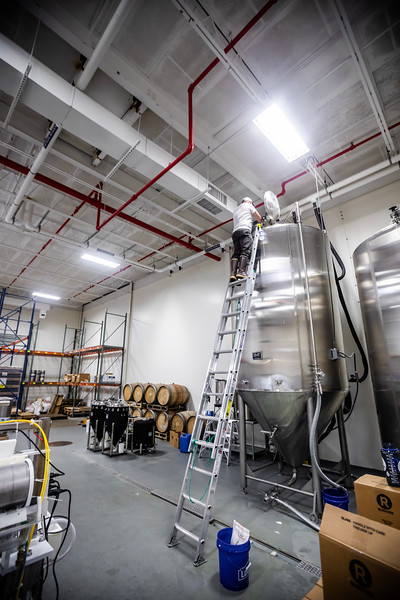 Next week, Fulton will add more hops to the beer – “dry-hopping.” And the following week, our beer will be ready. The dream team: 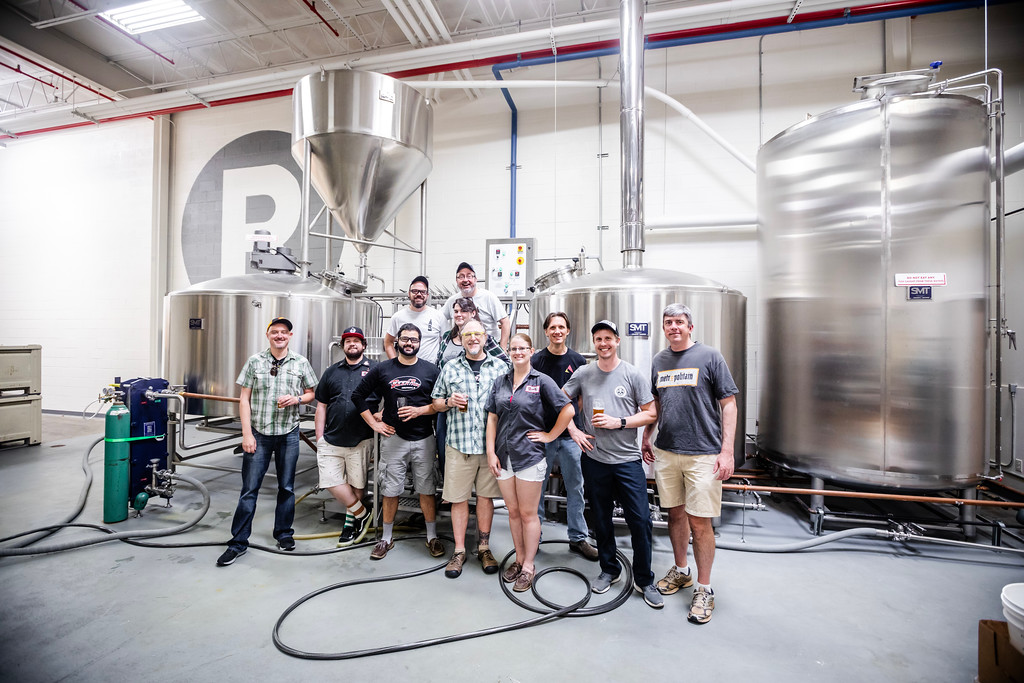 Thank you to Mark Fulton and the Reason team for creating this project, the first and only beer named after The Charlottesville 29. It is a great tribute to the Charlottesville food and drink community. And, the beer is just outstanding. Stay tuned.