The Corner: The Pigeon Hole 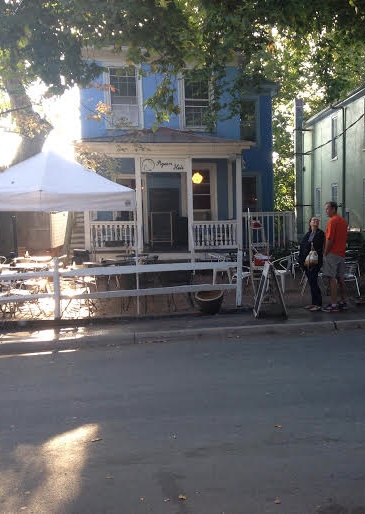 Note: This post is part of our guest series, The Corner, by digital media students at The University of Virginia. Today’s student contributor is Ali Hornung.

Founded in 2011 by Lex Gibson, The Pigeon Hole is now run by Hannah Thompson and Steven Stitz, who acquired it in January.  Gibson first worked at the restaurant in its prior incarnation, a dive bar called L7, which she managed before the owner decided to move on, and gave the place to Gibson. Gibson reinvented the venue as a “home away from home” for people to meet and eat.  Both Charlottesville natives, Gibson and Thompson noticed when they were growing up that, in the shadow of the University, few Corner eateries catered to locals.  The Pigeon Hole is designed to do just that, while also appealing to the University crowd.  Although Gibson has moved on, she still checks in often on the home away from home she helped to create.

By design, The Pigeon Hole is a place to feel warm and at home.  “There’s a lot of love here,” said Thompson. “It was built on love, and has continued to thrive on more than ‘let’s just sell food.’ It’s more ‘let’s make relationships with people.’”  Much like in a home, the whole staff is virtually interchangeable, trained to perform every task from serving to hosting and eventually to cooking. The aim is for the quality of service to be as good, if not better, as the food.

The homey feel has particular appeal with families. “We are the place where students bring their parents,” said Thompson. “We are the safe place to bring grandma.” Right on cue, during our meeting a guest approached our table and said how much she admired the cozy feel of the Pigeon Hole.  And, cozy it is.  How many other restaurants supply warm blankets so guests can bundle up and sit outside all winter long, if they please?

The food matches the mood.  “Simple. Classic. Comfortable,” said Gibson. “Straight up stripped down, happy wholesome, flavorful food.” As such, Stitz, who runs the kitchen, balks at the term “chef,” finding it too formal for what he sees himself doing.  No formality here.  During our visit, as a cook rang the bell announcing an order up, you could hear him belting “September” by Earth, Wind & Fire.

When Thompson and Stitz took over in January, they revamped some of the menu but kept the classics, including Huevos Rancheros, which is probably the most popular item among regulars, and happens to be Stitz’s favorite as well.  Hearty black beans are piled high with grated cheddar cheese, green onions, and fried eggs, and them smothered with a smoky chipotle sauce.

Also popular is the ever-changing “best French toast ever” special.  One recent rendition, Pumpkin and Apple Butter French Toast, featured Great Harvest’s cinnamon chip bread dipped in homemade pumpkin batter and stuffed with house-made apple butter. In fact, with the exception of the bread, nearly everything is made in-house, from scratch.

Filed Under: The Corner