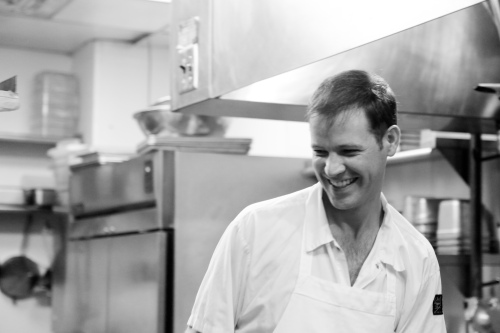 Already a talented bunch, The Alley Light‘s kitchen staff just got even better. Earlier this year, Brian Jones, who ran Petit Pois’ kitchen for more than a decade, decided it was time to move on. His new project was to oversee the kitchen of Timberwood Tap House, the restaurant from the Timberwood Grill team which opened in October, across from Wegmans. Now that Timberwood Tap House is up and running, Jones is returning to more sophisticated culinary arts.

In mid-December, he will join The Alley Light’s kitchen, led by Executive Chef and co-owner Robin McDaniel. “Robin and I are excited to bring aboard Brian Jones,” said McDaniel’s husband Chris Dunbar, also a co-owner. “Having both worked with Brian for a number of years at both Petit Pois and Fleurie,” said Dunbar, “we have first hand knowledge of his work ethic, attention to detail, organization, and creativity.”

It was difficult for Jones to leave Timberwood Tap House, which he says is off to a great start and in very good hands. “I had a wonderful time with the Timberwood family,” Jones said, “but, I realized that being behind the range, cooking, was where I wanted to be.”  Jones is excited to have the chance to do that at The Alley Light, while reuniting with McDaniel and Dunbar.

The restaurant does not expect any significant menu changes resulting from the hire. Instead, McDaniel will just have one of the best assistants a chef could hope for. Jones has worked with some of the nation’s most decorated chefs chefs, such as Daniel Boulud, Eric Ripert and Jean Georges Vongerichten. “Personally and professionally, we couldn’t imagine a better fit here,” said Dunbar.

Congrats to Jones and The Alley Light.