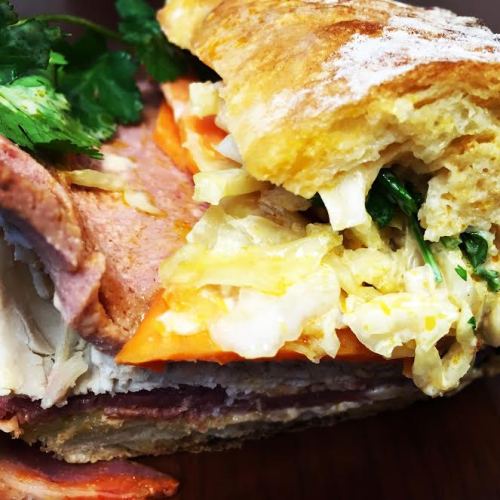 During his first stint in Charlottesville in 2012-13, Tommy Lasley made quite an impression.  As chef of Orzo, he quickly drew a following and was even named a Rising Star by James Beard semifinalist Angelo Vangelopoulos.  Lasley moved away in 2013, but has now returned and spent the last several months helping Ivy Provisions up its game.

And, again, buzz has quickly followed.  Case in point: one food-lover who used to be a chef in the area recently told us that Lasley was doing great things at Ivy Provisions and that the IVP Banh Mi is now the best sandwich in town.  So, we had to see for ourself.   Although the IVP version of the banh mi may bear little resemblance to the authentic 2-dollar Vietnamese sandwiches we’ve enjoyed in Asian neighborhoods of large cities, it does have at least one thing in common with them: it’s delicious.  Stuffed inside a warm baguette is a trio of meats: roasted pork, ham, and a rich, livery pate.  Then comes shredded cabbage, pickled carrots, mayo, chile oil, and a few sprigs of cilantro.  Delicious indeed.