Note: This post is part of our guest series, The Corner, by digital media students at The University of Virginia. Today’s student contributor is Meghan Kasel.

Fig—short for “Food is Good—“ opened in September 2013, and the vision was clear from the start.  Owners Anja Andelic and her husband Jozo, who share a Balkan background and a passion for food, have been part of several food ventures in Charlottesville during their sixteen years here, all focused on the traditional food of their native region.  First was the stand at the City Market, offering Balkan delicacies like pierogies and baklava.  Next came the Balkan Bakery and Cafe, and finally the Balkan Bistro, which closed in 2013.

With Fig, the Andelics wanted to continue to honor their Balkan roots, but also do something a little different.  They thought that their native cuisine would blend beautifully with one of their favorite styles of food they had encountered in the United States, Cajun.

Why? “Both are really big and loud,” Anja said matter-of-factly. And, they are comforting, too. The result is a unique menu featuring hybrid dishes such as Cajun Shrimp and Mash Pirogue – Cajun-spiced pan-seared shrimp, house-made pirogue stuffed with mashed potatoes, garlic cream and fresh roma tomatoes.  Anja sums up the restaurant’s food philosophy simply: “It’s that soul food—it’s that make-me-feel-good food.”

The location feels right, too.  In the Spring of 2013, while strolling on The Corner, the Andelics noticed a “For Lease” sign in one of The Corner’s signature locations.  Most recently occupied by Cafe Europa, the site once housed the legendary University Diner.  Now, it is home to Fig.

In overhauling the space, the Andelics worked to create a dining experience that distinguishes itself from other Corner eateries. String lights drape the ceilings, with café-sized tables and a dark wood bar rounding out the room. “I wanted to take the European food experience and bring it to Charlottesville,” Anja explained. That feel is underscored by an intimate setting—with low lighting and a wait-staff in head-to-toe black.

Perhaps the most captivating part of FIG’s charm is a large mural covering the front wall of the restaurant. “There’s my dad making the sausages!” Anja said as she pointed at the colorful illustration of her family in various food activities—all revolving around the Charlottesville City Market, from which they get many of their ingredients. The mural reflects the Fig experience —warm and comfortable— like family.

When asked what the most popular dishes are, Anja cites four.  Fig Salmon—fig sauce, farmers market veggies and walnut mushroom risotto; Shrimp and Goat Cheese Linguini—tomato sauce, goat cheese, and Cajun style shrimp; Lamb Burger— lamb patty, feta cheese, basil pesto on a pretzel bun; and the Cajun Shrimp and Mash Pirogue.  The dishes are so popular that on any given night, they are prone to sell out.  Anja’s own personal favorite is the Shrimp and Goat Cheese Linguini. “I make the Romesco sauce myself,” she said proudly.

As popular as these fusion dishes are, there is one Balkan staple that won raves at all of their prior ventures and still makes a special appearance every now and then at Fig. Cevapcici are handmade Balkan sausages typically served with fresh flatbread and chopped onions.  Some have called them one of the best dishes in Charottesville. Psst, we hear they will be on the specials menu next week. 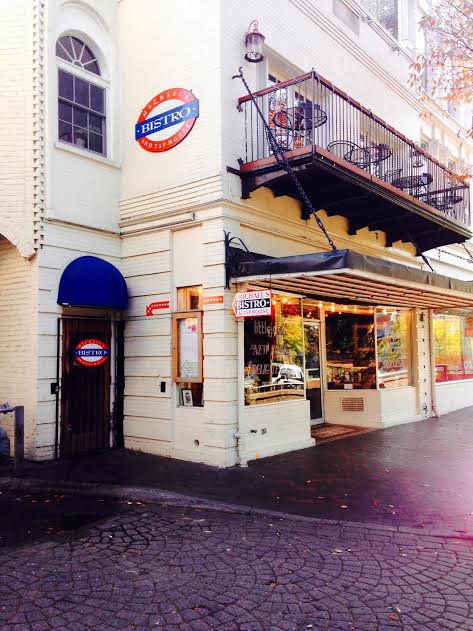 Note: This post is part of our guest series, The Corner, by digital media students at The University of Virginia. Today’s student contributor is Ali Donaldson.

Michael’s Bistro and Tap House has been “tapping it since Clinton was President” as their t-shirts will tell you. First opened in August 1994, their twenty-year run on the Corner is no small feat. The Bistro was founded by Michael Crafaik, a pioneer who had a vision to open a restaurant built around craft beer long before it was trendy. His requirements were clear (and unheard of at the time in the area), a ten-tap bar flowing with microbrews and ciders. “Nobody really even on the East Coast was doing this at the time,” said current owner Laura Spetz. “From the beginning, it was something unlike anything else Charlottesville had really seen.”

Crafaik passed away in 2008, but his longtime staff stepped in to sustain what he created.  Spetz, who first managed the bistro in 1994, returned as owner to carry the torch. “My life came full circle and I was back at Michael’s Bistro.”  Throughout her tenure, executive chef Matt Lechmanski has manned the kitchen.  Lechmanski was on the bistro’s staff before that, and has been in the restaurant business as long as he can remember, starting out  washing dishes as a teenager. “I’ve spent the better part of my life chained to a stove — happily, mind you,” said Lechmanski.

While Spetz and Lechmanski have been with the bistro for years, other folks have found it a good place to learn the ropes before running their own restaurants around town, like Maya, Blue Moon Diner, Ace Biscuit and Barbecue, and Brazos Pop Up Taco Shop.

“We are not above pretension, but we are above Littlejohn’s,” they will tell you with a sly smile.  Hardwood stairs lead you up to the Bistro, where the walls are lined with wooden booths.  The light is dim. The mood is relaxed and comfortable. Glass doors open to a balcony of rod-iron tables—overlooking the constant shuffling of the Corner. “As far as location goes, I don’t think it could get any better,” Lechmanski said.

Yet, Lechmanski and Spetz have also found that the location brings with it pressures that are unique to the Corner. The Bistro has long been committed to using local food and ingredients wherever possible.  At the onset, before the locavore trend, this was a bold choice, but at Michael’s Bistro, they consider it a responsibility. Chalkboards by the bar list local suppliers like Timbercreek Farm (their first), Polyface, the Local Food Hub and the Spice Diva among others. The Bistro soon plans to add to that list Goodwin Creek Farm & Bakery and source all of their bread from the Afton farm.

This committment to local sourcing comes at a price. A menu of high-end, local food puts the Bistro to the test on the often more causal and student-priced Corner. “It can be challenging to do things right, but keep things affordable. We’re not doing mozzarella sticks,” Lechmanski said. “We’re doing a lot of the same local foods that people midtown and downtown are doing,” Spetz explained, “but we can’t charge those prices.  We have to do it as well as others, but at Corner prices.”  Reasonable prices make the Bistro accessible to anyone, from students to faculty to those just passing through.

The Bistro’s specials are always changing, depending on what’s available from suppliers. The regular menu changes seasonally as well, and the Bistro is about to make the switch to their fall and winter menu. Lovers of the longtime fan-favorite chicken pot pie can rest assured that the wait is almost over.

The Bistro’s other most popular dishes, Thai Chicken Curry and the Portabella Mushroom Napoleon, actually predate Lechmanski’s tenure as executive chef, but are so beloved by regulars that the Bistro could never take them off the menu.  Lechmanski’s personal favorite is the Grilled Pork Chop from Polyface with hickory syrup and a bourbon glaze. He has also done the same pork chop as a special with an arugula pesto marinade, another of his favorites.  As for Laura, she can never decide, as her favorite depends on the day. One thing she is sure about:  “There’s not anywhere else I’d rather be.”

Note: This post is part of our guest series, The Corner, by digital media students at The University of Virginia. Today’s student contributor is Hajung Yoo.

Tuesdays during The Corner series feature two favorite Corner food items selected by a different University figure each week. Today’s picks come from basketball star Joe Harris, who last year led Virginia to the regular season and postseason ACC Championship, and was awarded ACC Tournament MVP. This Friday will mark the first time in 1,708 days that Virginia will play a game without Harris on its roster.  Harris now plays for the NBA’s Cleveland Cavaliers.  And, while he loves playing alongside the likes of teammate LeBron James, he still misses his favorite foods on The Corner. Harris’ picks:

1)  Funky Q Chicken Pizza with a Caesar Side Salad at Mellow Mushroom.  “It’s one of the few beloved franchise restaurants on the Corner and a hot spot for unique pies, beer specials, and trivia night. Their garlicky, cheesy, fresh crust is ‘the greatest.'”

2)  Any Sandwich at Take It Away. “I could literally swim in their house dressing. It is so good, and they have amazing bread.”