There’s a lot to like about the new, expanded location of Gearharts Fine Chocolates, on Vinegar Hill.  For one, the space is beautiful.  The ceilings tower and the maple floors gleam.  One wall is reclaimed wood from the roof of a 19th century Virginia barn, while another has massive windows along the kitchen, with a mesmerizing view of award-winning chocolate making.  And, then there are all of the things that pastry chef and Culinary Institute of America graduate Tim Gearhart has long wanted to do, but which his tiny space in Main Street Market would not allow:  cakes, pastries, and world-class hot chocolate, to name a few. 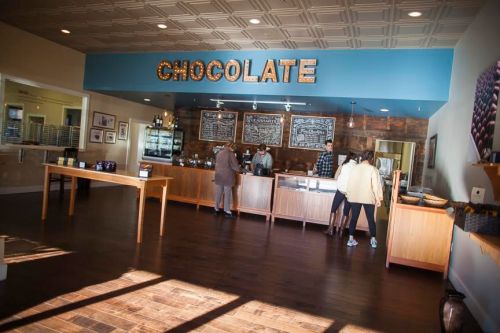 All photos by Justin Ide Photography.

But, perhaps the most enticing of the new offerings are chocolate parties – where guests now can not only get a behind-the-scenes look at one of the nation’s most acclaimed chocolatiers, but also make chocolates themselves.  Chocolate can be a mysterious product, and one of the aims of Gearharts’ new location and display kitchen is to reduce the distance between consumer and producer.  The parties are another step in that direction.  “We wanted to continue the community feeling and enhanced chocolate experience that we started with the new space as a whole,” said Gearhart.

Gearharts’ parties come in all shapes and sizes, custom tailored as desired.  They even have an ABC license for guests seeking an added dimension to their event.  “We have had inquiries from business meetings to girls night out wine and chocolate pairings and everything in between,” said Gearhart, who personally likes the idea of a gentlemen’s chocolate pairing with beer or whiskey. 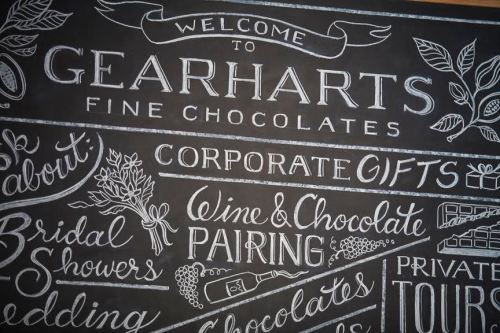 The signature party is a truffle making class – a hands-on lesson in making Gearharts’ famous truffles, with a variety of finishes. For children and less-ambitious adults, there is the option of a dipping party, where guests dip ganaches and other age-specific items into melted chocolate and then let them dry to set.  All parties begin with a guided tour of the entire facility and end with a box for each guest of their chocolate creations.

On Saturday, my daughter hosted Gearharts’ first ever party, to celebrate her eighth birthday.  Though a trial run of sorts (which Gearharts generously covered), the party went off like they had been hosting parties for years. Gearhart told the children of the importance of “perfection” in making chocolate, and he brought that same attention of detail to planning an eight-year-old’s birthday party.  The talented Justin Ide, of Justin Ide Photography, joined us to capture images of the fun.

The party began, naturally, in the party room, where the children decorated aprons while Gearhart gave an overview of the chocolate shop’s history and growth, from the early days when production was 500 pieces-per-day to today, when daily output can exceed 12,000 pieces. 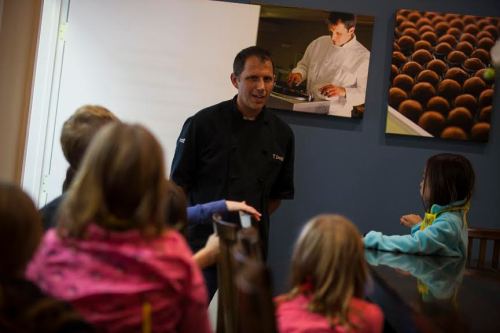 Next, the kids received a tour, while Gearhart offered a kid-friendly description of the chocolate making process from beginning to end. He even taught them the most important word of the day: “ganache.” 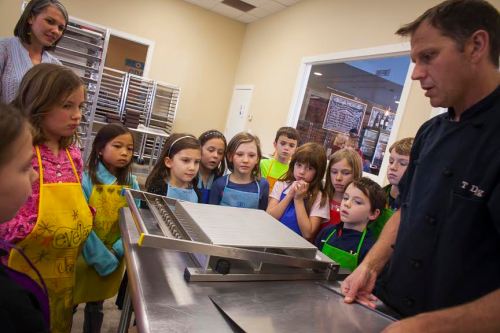 “This tray,” said Gearhart, “has the beginnings of our peanut butter pups.”  I’m allergic to peanut-butter!  – piped up one kid. “Then don’t touch these!” 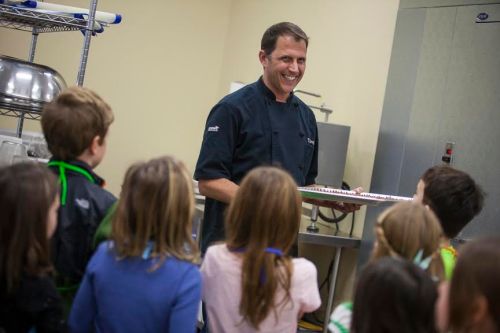 After the tour, Gearhart led the children back to the party room for chocolate dipping.  One at a time, the children dipped a Michigan Cherry ganache into a swirling pool of tempered chocolate, and then took turns dipping items like Rice Krispie treats, gummy worms, and Oreos. 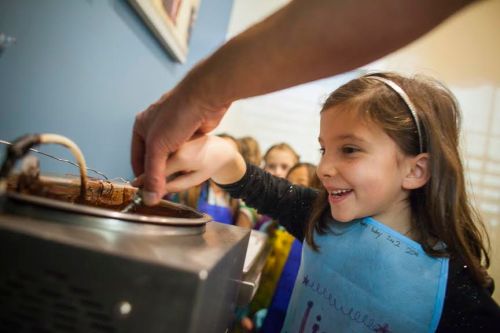 They then set their creations out to dry on parchment paper marked off into segments for each child. 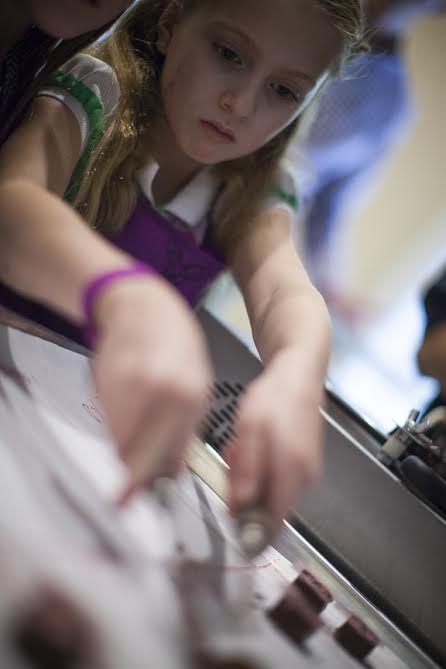 All the while, Gearhart, ever the perfectionist, monitored the temperature and speed of the chocolate temperer. 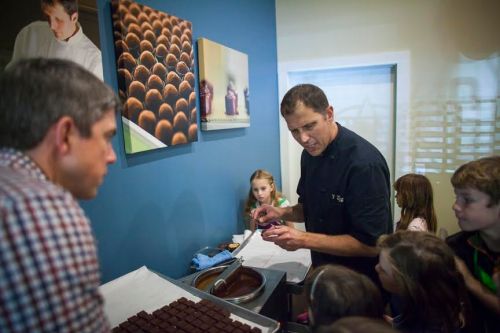 The children topped their ganaches with a pretty design made of cocoa butter. “Before the party, I had no idea how Mr. Gearhart made the pattern on the chocolates,” said my daughter’s friend Ev.  “And, it was really cool to see how he did that.” 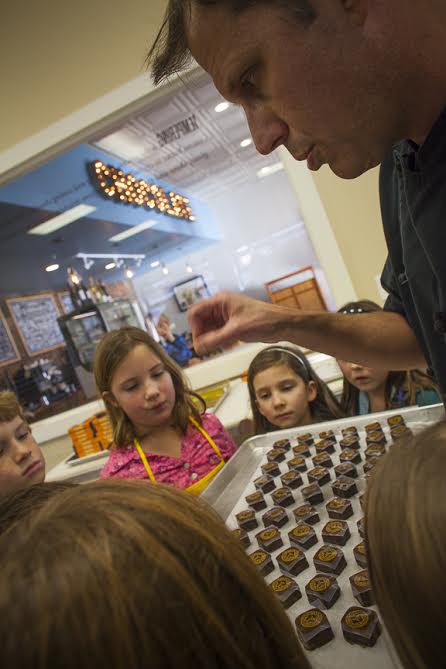 When the chocolates were done, it was time for cake — chocolate of course.  From the parents’ perspectives, this may have been the day’s showstopper.  Gearharts’ Chocolate Buttermilk Cake is an instant contender for the area’s best chocolate cake, and there’s no surprise as to why.  Gearhart and his staff spent months perfecting it.  They collected and sampled all of the best chocolate cakes they could find, and created a new cake incorporating their favorite aspects of each.  The key to Gearharts’ may be the buttermilk, giving the cake a tangy, acidic finish that adds complexity while cutting the richness that can make some chocolate cakes’ last bite less enjoyable than the first. 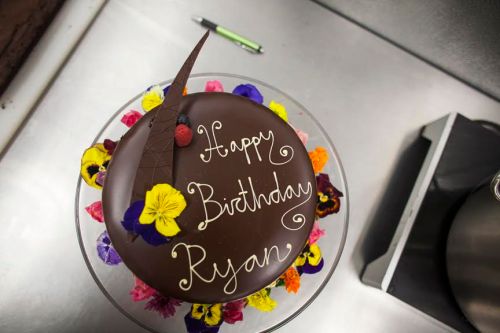 After cake, the children boxed their own creations to take home with them. 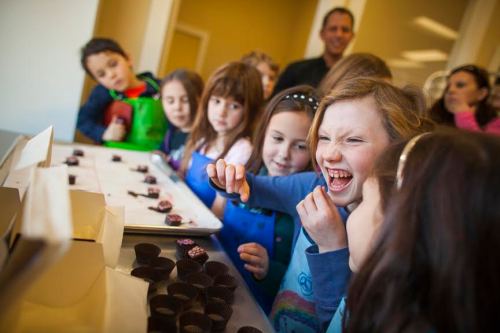 Throughout the party, the birthday girl wore a perma-grin, from ear-to-ear.  And, afterwards, she said simply: “I loved it.” 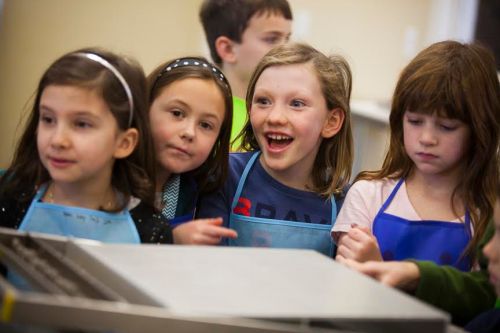 Bodo’s Deli-Egg: Behind A Local Legend 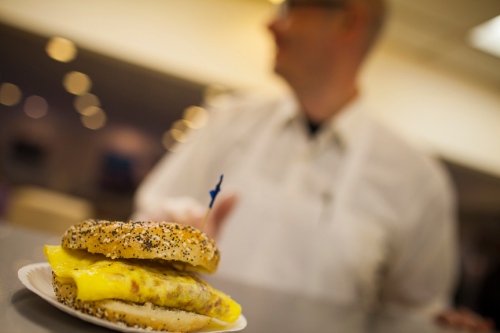 Wonder no more.  With help from talented photographer Justin Ide, Bodo’s recently took us behind-the-scenes to crack the Deli-Egg mystery. So, behold the glory of a sandwich that has not just made several appearances on Five Finds on Friday, but has become a local legend.  We like ours with American cheese on an Everything bagel, cut in half. But, we’re not going to tell anyone how to enjoy their Deli-Egg.

The Makings of a Deli-Egg

A Deli-Egg is essentially an omelet filled with diced scraps of deli meats and cheeses.  It’s a cunning way to use the tail ends of the meats that it would be too hard to slice for sandwiches.  Bodo’s version includes pastrami, corned beef, ham, capicola, and salami.  They also add three cheeses, again diced: provolone, Swiss, and Muenster.

First, dice the meats and cheeses. 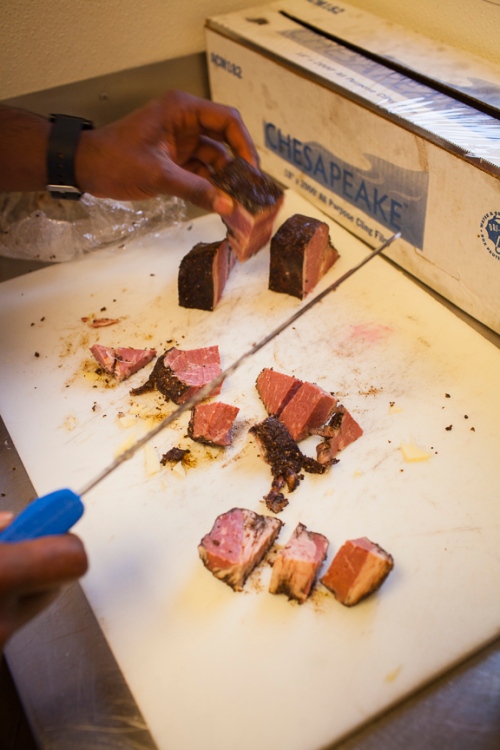 The results of all that dicing are the Deli mix, ready for use: 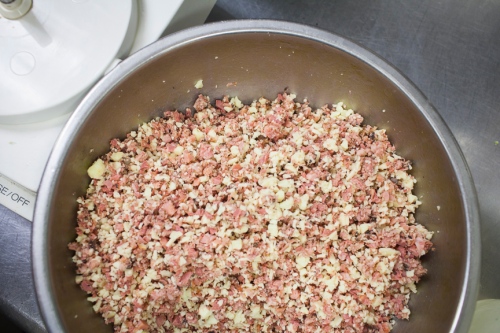 When someone orders a Deli-Egg, pour some of Bodo’s freshly made egg mixture onto a hot griddle, and add a “generous handful of Deli mix,” as Bodo’s co-owner Scott Smith puts it: 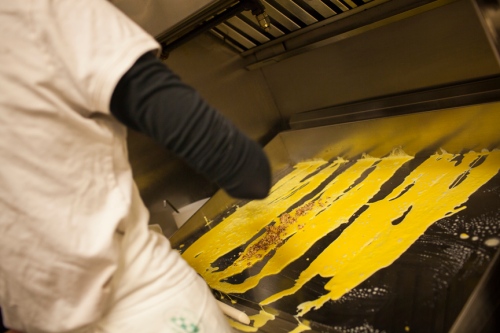 Cook the egg together with the Deli mix: 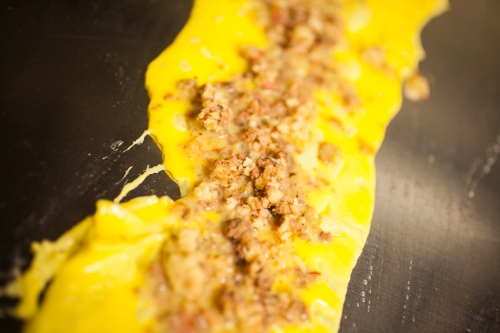 Then, fold the egg over to create a tidy, delicious package: 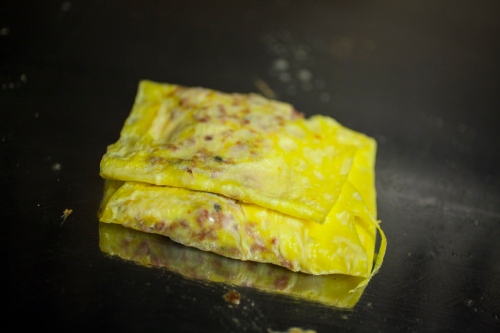 Place the omelet on a freshly baked bagel, and the masterpiece is complete: 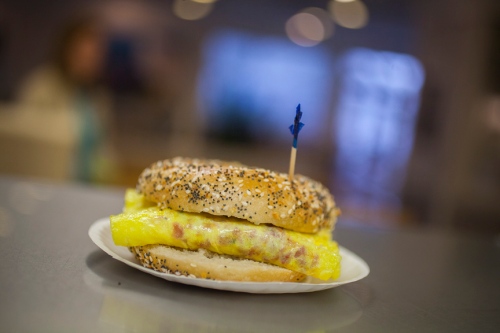 All that’s left to do is grab one, and dig in. 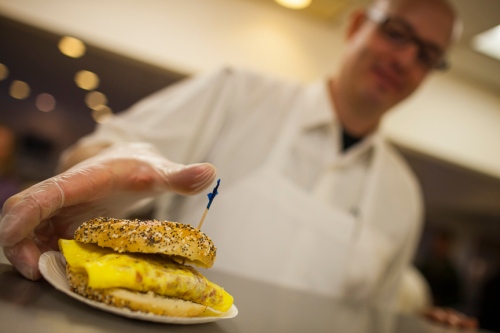 The Deli-Egg is so beloved that it has even inspired poetry over the years.  Co-owner Scott Smith’s haiku, circa 1999:

you wait, plumes of steam
brief heralds to crumbs of meat,
upon everything