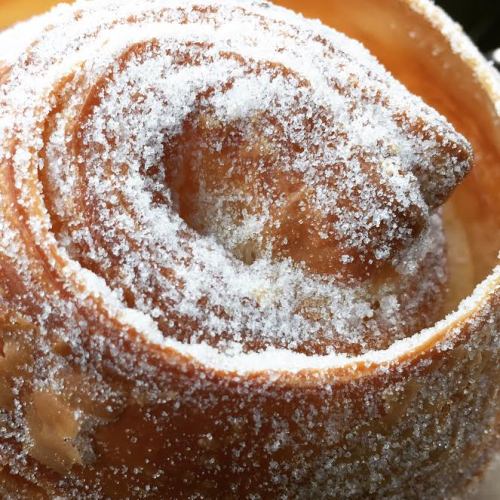 One year ago today, at MarieBette Cafe & Bakery, I had my first brioche feuilletée. I enjoyed the flaky French pastry so much that I wrote a glowing review that very morning, joking that it might be more popular if it had its own publicist. In today’s era of social media food crazes, I imagined, the hard-to-pronounce brioche feuilletée would be a sensation if only it had a more hashtag-friendly name. Since it resembled both a brioche and a donut, I suggested “bronut”, a revolting name posed as a cheeky alternative to the croissant-donut hybrid from renowned pastry chef Dominique Ansel. The cronut, after all, had become so popular that it needed one of those ®’s by its name to signal it’s really special, or at least valuable. So, why not the “bronut”? LOL.

And then something crazy happened. The next day, Eater picked up the bronut, declaring it “totes the new cronut.” Thrillist promised the bronut would “make you forget the cronut ever existed.” Others followed suit: Redbook said they were “hoping for a national movement of bronuts”; NBC 29 news reported on the “bronut sensation”; My Recipes touted it the “darling of 2015”; Savory called it a “playa”; and, Food & Wine even ascribed volition to the pastry, saying it “strives to be more trendy, less fratty than it sounds.” As Business Insider summed up in its headline, “A Virginia bakery inadvertently invented the ‘bronut.'”

Of course, none of the reporters behind these articles had ever tasted a bronut. Nor could they have. It didn’t exist. It was just an age-old French pastry, re-named in jest by a Virginia lawyer. A tongue-in-cheek parody of social media sensations caused the very phenomenon it gently mocked.

And, the public lopped it up. Here in Charlottesville, lines formed before the bakery even opened and lasted throughout the day. The same pastry that a day earlier sat sadly in the display case unnoticed suddenly sold out every morning. Unable to keep up with demand, MarieBette imposed a limit per customer, among other rules. I recall visiting the bakery amidst the craze (for a canele), when a woman in front of me was disappointed to learn that they were out of “bronuts.” After her request to reserve some was declined (per bronut policy, of course), she asked how long until the next batch would be ready.  20-30 minutes.  “OK, I’ll pay now and wait in the car.”

The rest of the world took notice as well. Orders poured in by phone and email from all over – Florida, Arizona, California, to name a few – all of the orders declined because, who’s going to sell a stale pastry? It caused a particularly big stir in Indonesia.

MarieBette handled it all perfectly. On the one hand, they didn’t change the essence of what they are – a classic French bakery and patisserie doing things the right way. So, there were no gaudy signs in the style of a Myrtle Beach T-Shirt shop boasting MarieBette as the “Home of the Bronut.” In fact, even amidst all the hype, there was nary a mention of the word “bronut” on the display counter, leaving confused customers wondering what to order when they reached the front of the long lines. “Umm . . . do you have a bronut?” they would sheepishly ask.

Yet, MarieBette didn’t run from the attention either. Owners Patrick Evans and Jason Becton have children after all, who one day may need college tuition. As tennis legend Ivan Lendl once said: “Don’t spit on somebody who’s trying to give you money.” And so, Becton and Evans gracefully did press interviews. And, they embraced the social media sensation as well, even creating a section of the bakery’s website about the brioche feuilletée.

Meanwhile, uneasy with the “fratty” sound of the name of their overnight sensation, MarieBette employees turned the term “bronut” into a positive, even a term of endearment. “Hey, bronut!”, one would say to the other in the kitchen. Or, “What’s up, bronut?” Of the sudden need to make brioche feuilletée before croissants, they adopted the slogan “bros before cros.”

I have often wondered what lessons there are to draw from the bronut craze. At times, it reminded me of those old TV shows where one of the characters would inadvertently start a dance sensation after hopping on one leg grabbing his foot because someone had stepped on his toe. But, the analogy is imperfect because a brioche feuilletée is actually good. While the happenstance of social media may have fanned the flames, it was the quality of the product that started the fire and helped it last. Had it not been delicious, I would never have been moved to write about it and others would not have swooned as well. Though the attention it received may have been disproportionate, over-appreciation strikes me as preferable to under-appreciation.

Oddly enough, MarieBette did invent a version of the brioche feuilletée warranting its own name, but not until after the bronut craze began, when MarieBette started filling their brioche feuilletée with things like orange creme or pumpkin mousse. I am not aware of anyone ever doing this before, and it was genius. In my view, MarieBette’s filled brioche feuilletée improve on the original. And, I’m not alone. One top local chef called it the best thing he ate all year. 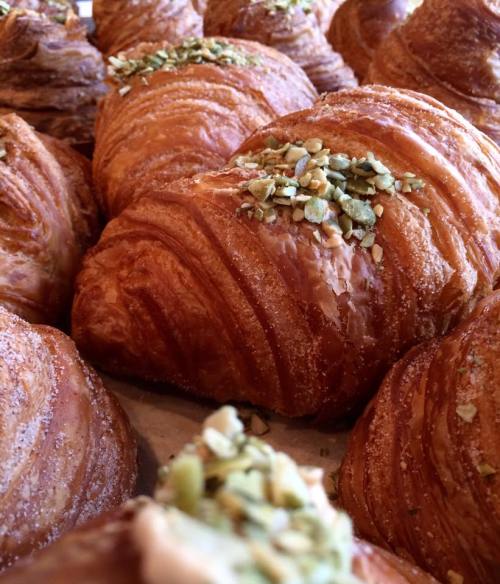 The morning I first tried a brioche feuilletée, sales of the pastries had been so slow that MarieBette planned to stop making them that week. I was headed to Shenandoah Joe for coffee and, on an impulse, stopped at MarieBette. Good thing I was feeling peckish.